Journey to The Ibex 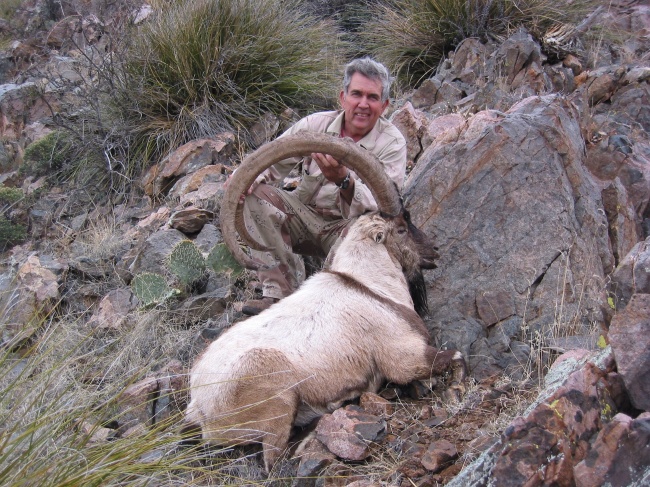 Lowering an Ibex down off a cliff

Many of you know I finally drew an Ibex tag in New Mexico’s Florida Mountains. The Florida Mountains is the only place in North America where you can hunt pure-blood free-ranging Persian (Bezoar) Ibex. Introduced from Iran in 1970 it hasÂ become one of the most sought after hunts in North America… It also boasts one of the lowest success rates and highest rate of hunter abandonment…..

“The Rock”Â as it is called by the locals… is a very inhospitable place, As if the steep, rugged and often deadly terrain wasn’t bad enough…. if it doesn’t sting you, bite you, poke you or make you bleed you wont find it onÂ The Rock, everything is out to stop you here. Peterson’s Bowhunting lists it as “the most challenging bowhunt on earth”

So why?.. do you ask…Â  There is an unexplainable draw to theÂ idea of matching my abilities against an adversary that has beaten so many before me and so many better than I….Â Â I know very well that the odds are stacked against me and chances are I will not succeed but I still want to go there to do battle… not with The Rock, not with the Bezoar but with myself…. Its funny because most people almost all the people I have met that have gone to The Rock and failed… wish you “luck” in a manor that’s says more like ” I hope you fail” “I hope the rock crushes you as it did me” but I don’t care… I’m not out there to beat you.. or to prove I’m better than anyone, I’m doing it for me…

My quest for the Ibex started 12 years ago when I drew a Muzzle loader elk tag in NM, I unfortunately did not have a whole lot of time for this hunt and no one to go with me… so I found myself alone fumbling my way through a unit I had no experience inÂ trying to locate a bull . I only had 3 days to hunt and my first 2 were fruitless to say the least…. Finally my 3rd morning I heard some bugling off in the distance and made a desperate play to close the distance.Â Step by step IÂ was getting closer and closer and I could hear the bulls screaming their heads off… I could almost feel the impact of their antlers as they began to fight each other….Â This was it… I was gonna make it happen I checked the wind and picked my line of attack….. Boom!!!!! and then silence….. someone had just shot the bull I was stalking, I hurried in the direction hoping to maybe get an opportunity at the other bull or at least seeÂ what had happened….. I showed up just in time to seeÂ a middle agedÂ Gentleman walking up with a youth hunter to a great looking 6×6 bull… My anger turned to and almost joy that it was a young kid taking his first bull so I walked up to them and told them the story how I had been chasing the bugles all morning yadda yadda…

After talking for a bit I realized that these two were far off from their truck and that help was far away so I offered my services and helped them pack out this bull until I had to leave to head back home myself… Well my efforts did not go “un-paid”… The gentleman happen to be a well known guide in the area by the Name of Dennis Kauffman of Kauffman OutfittersÂ and he was generous enough to offer me his services in return for my helping them.. ” if you ever need help on a hunt you let me know I will be there” well it turns out that I never drew another tag in NM but Dennis and I kept in contact and spoke often, and he introduced me to a good friend of his Tim Barraclough whoÂ  owns Kiowa Hunting Services Tim graciously tried Â to help me put together a DIY barberry sheep hunt in NM with an OTC tag (which never panned out because I couldn’t get my friends to go with me).

So through a chance encounterÂ  that brought me 2 new friends both of which introduced me to the idea of hunting ibex… I began putting in for ibex 9 years ago which has finally come to a head with my successful draw of this coveted tag in 2015…..

I feel blessed to have 2 of the most successful Ibex hunters in my corner and I have high hopes I will have a successful adventure… weather that means I get one or not… that story has yet to be written…..