Hunting elk during the late season can be a very rewarding experience for those who understand the tactics and mental fortitude needed to be successful. The rut is over and the bulls have become reclusive to feed and relax in an attempt to gain strength and body mass they lost chasing cows around a couple months prior.Â  In order to key in on the areas late season bulls are using and execute an effective plan for your hunt, several items must be noted and utilized before and after stepping foot into the hunt arena.

What are the bulls doing this time of year?

Generally the bulls are replacing up to 30 percent of their body weight that was lost during the rut. They are mending sore bodies as they feed and sleep in areas that have the highest concentration and quality of food they can find.Â  If they are not receiving any pressure from hunters and feel secure, it is possible that they will spend quite some time in a general area exploiting a decent food source.Â  Look for south facing slopes that harbor food sources like mountain mahogany, scrub oak, and cliffrose because elk typically shift gears and browse more than graze this time of year due to the availability of food sources.Â  Iâll expand later about why I focus on these types of browse species when hunting late season elk.

If you are able to find an isolated pocket of country that holds a good amount of food and offers the bulls security from other hunters, you are on the right track. These bulls have been hunted for a couple months by now and are beginning to realize most hunters are going to be within short walking distance of roads.Â  Look for areas that are road free for at least two square miles to locate elk enjoying a relatively pressure free environment.Â  They will either be alone during the late season or with a few more bulls, they generally are not with the groups of cows this late in the year.

How do I locate areas bull elk use during late season hunts?

There are several methods in which one can utilize to determine where the elk might be during the late season. Getting to know the hunt unit through computer research and talking to other like-minded individuals about your hunt area will help narrow down your search, although nothing replaces actually scouting your unit before the season.Â  Hunters can however take all the information they have gathered before scouting and apply that knowledge to their on the ground efforts.

The Internet is a vast source of information that is sometimes overlooked as a viable resource for scouting. First and foremost, the single most valuable scouting tool on the internet is Google Earth.Â  By studying the aerial images of a hunt area, hunters will gain a very comprehensive understanding of the terrain features, roads, water sources and a host of other important information that can lead them to success during their hunt.Â  It is relatively easy to find glassing spots using the âtiltâ feature leaving little to the imagination when you are in the unit actively scouting. Â This feature alone is a major time saver while scouting. Take notes while using Google Earth and start an elk hunt file that contains the information you have learned while using the service.

The game and fish website in your state is also a great way to get generalized information about a hunt unit. Keep in mind that other hunters have access to the information as well so relying upon information found here without first checking out the areas mentioned may result in disappointment.Â  I like to take it a step further when collecting information from game and fish websites.Â  If they mention that spots âAâ and âBâ offer good elk hunting during the late season, Iâll check them out for validity but more often than not, I will find my own spot âCâ.Â  I do this by analyzing the information Iâve learned about the suggested spots on the website, and then find similar spots that have all of the same attributes as the suggested ones.Â  More often than not, I will look for areas that have more difficult access as well to ensure fewer hunters are willing to go there leaving me with unpressured bulls that are acting like they are supposed to rather than holed up all day only to come out at night because of all the pressure.

How to Effectively Scout/Hunt Your Hunt Area

After determining through your initial research which portion of the unit you wish to scout, download or buy maps that coincide with that area or use your GPS if it has mapping capabilities. The amount of time spent scouting your hunt area is directly affected by your schedule.Â  Try to make as much time as possible to scout but if you can only make it up to your unit a couple times before the season, ensure you make the most of your available time.Â 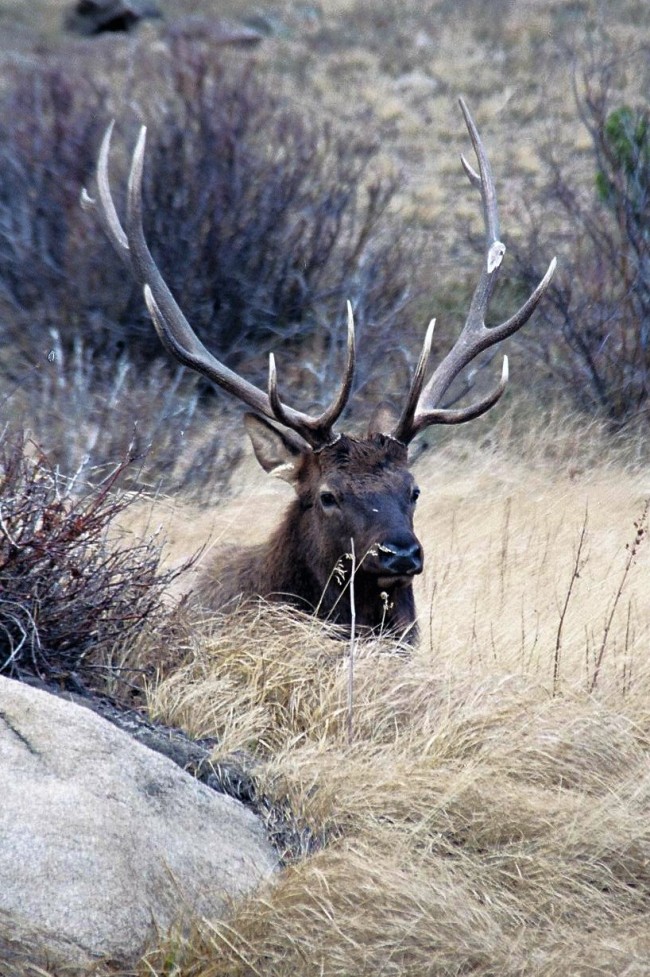 Earlier, I mentioned a few browse species I like to focus on during the late elk season. It is no accident I like to hunt elk in areas of lower elevation than traditional ponderosa/park elk habitat.Â  Glassing!Â  The areas in which these types of vegetation are prevalent lend themselves to glassing because the elk are more visible and can be seen from great distances at times. Glassing for elk is by far the most effective way to locate bulls when they are not vocal.Â  Glassing also gives hunters the chance to look over many bulls throughout the course of their hunt until finally deciding which one they would like to pursue.

A detailed article about glassing techniques will be available very soon and will include comprehensive tips and tactics hunters can use to increase their likelihood of success. The blanket definition of glassing âlocating game with the aid of opticsâ is very vague and misleading.Â  In order to glass in the most effective manner, hunters must use supreme scrutiny while behind the glass as they display great patience during their search.Â  You will be surprised at how well such a large animal can hide when he wants to be hidden!Â  By following a few generalized rules of glassing, you will soon become very comfortable behind your optics as you gain confidence along the way.

After reaching a pre-determined glassing point that has a commanding view of elk country, use your tripod mounted 8x, 10x, or 15x binoculars and scan likely areas elk may be.Â  By scanning first, you may catch a bull out in the open or happen to see some antler tips swaying above the brush.Â  Sometimes this is all it takes.Â  After scanning an area, itâs time to get down to business and follow a rigorous grid pattern looking for pieces of elk rather than an entire animal.Â  During the grid, ensure you are paying close attention to detail and panning slow enough to catch the slight movements of bedded bulls.

Still hunting is the act of slowly and quietly moving through the woods using your eyes and 8 or 10 power binoculars to see an elk before he sees you. Playing the wind is the most important factor in still hunting because of the elkâs amazing sense of smell.Â  If you donât have control of the wind, you donât have much of a chance of seeing elk.Â  Pick an area that is not glassable, but holds a good population of elk for your still hunting efforts, if you are seeing a lot of fresh droppings and tracks you are in the right place.Â  Proceed slowly, only a few steps at a time, using your eyes, ears, and nose to locate the elk.Â  More than once Iâve smelled or heard elk before seeing them.Â  Listen for hooves on the ground and rolling rocks, if you hear something stop and go on red alert!Â  If you smell the tell-tale odor of elk, ensure you are proceeding into the wind very slowly paying close attention to your surroundings.

While still hunting may not be the most effective tactic for hunting elk, it does have its place in your bag of tricks. Sometimes a change of pace is all it takes to change a marginal hunt into a great one.Â  The best hunters know when to change it up a bit and try a different tactic, roll with the punches if you are having a tough elk season and try still hunting for a change of pace.

A positive mental attitude is the single most important factor in any hunt. By staying positive you will not only think more clearly, but be able to capitalize on an opportunity when it presents itself.Â  If things arenât going your way, remember that it only takes one bull to change your outlook on the entire hunt.Â  You may find him at any moment; by staying positive, you will be ready when you do.Â  Have fun out there!Â  After all you are elk hunting right?Â  You are not at work nor should you worry about any problems you may have back in the âreal worldâ.Â  Stay vigilant and focus on the task at hand and good things will happen.

Everything that has been mentioned in this article is meant to assist in your success as an elk hunter. The only variable that was not covered in depth here is you.Â  You are the only one that determines if you will be successful while elk hunting or not.Â  Sure there are always unforeseen circumstances encountered throughout the course of the hunt that may affect your success, but the bottom line is how you handle these adverse situations and own the hunt.Â  If elk hunting success is truly part of your agendaâ¦Make it happen!Â  Do everything in your power to ensure success, live, breathe, and sleep elk hunting.Â  Make it part of who you are.Â  Make it an experience you will never forget.