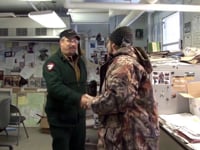 Blaine Anthony began his outdoor television career seven years ago on The Sportsman Channel. Before diving into the world of outdoor television entertainment, Blaine made his living in the outdoors as a Registered Maine Guide. Blaine provided all-inclusive bear hunts to hunters from around the world for seven years. In that time, he acquired intimate knowledge on the elusive black bear and the world of hunting by traveling the world to ensure hands on experience with all types of bears from many regions. Many of Blaine’s customers touted his uncanny connection with the bears and his endless entertaining stories of bear encounters. At the advice of many customers, friends, and industry professionals, Blaine took his adventures to outdoor television. As host of The Bear Whisperer television show, Blaine travels throughout North America in search of the most dangerous and misunderstood big game animals. The Bear Whisperer aims to not only entertain viewers with upbeat and exciting hunts with Blaine’s quirky appearance and upbeat attitude, but also educate them on all that pertains to conserving and protecting the future of the bears. Blending excitement with education, and working with the most knowledgeable and credible experts in North America, sets The Bear Whisperer apart from any other hunting show on television. You may recognize Blaine as the host of North American Safari, airing on The Sportsman Channel in its seventeenth season. Throughout the years, viewers have enjoyed his quirky “rock star” image, exciting adventures, modern style, and visually pleasing approach to hunting television. Blaine also owns and runs Nature Productions, a full production company that currently puts out some of the industry’s top outdoor television shows. The son of a military man, Blaine moved around the world throughout his childhood. As a young man, he settled in the Washington, D.C. area and started his career. The never-ending draw to the outdoors eventually brought him to central Maine, where he and his family still make their home today. The nickname “Bear Whisperer” was coined to Blaine back in the year 1999. He always had a connection and understanding with bears without ever loosing the respect of the awesome predator. Considered to be one of the only “true” bear conservationist employing real conservation methods such as tagging, tracking and maybe the most important conservation efforts of all hunting, Blaine brings a real life, no holds barred show to millions every week